INTERNET
Where the Digital Economy Is Moving the Fastest
Bhaskar Chakravorti 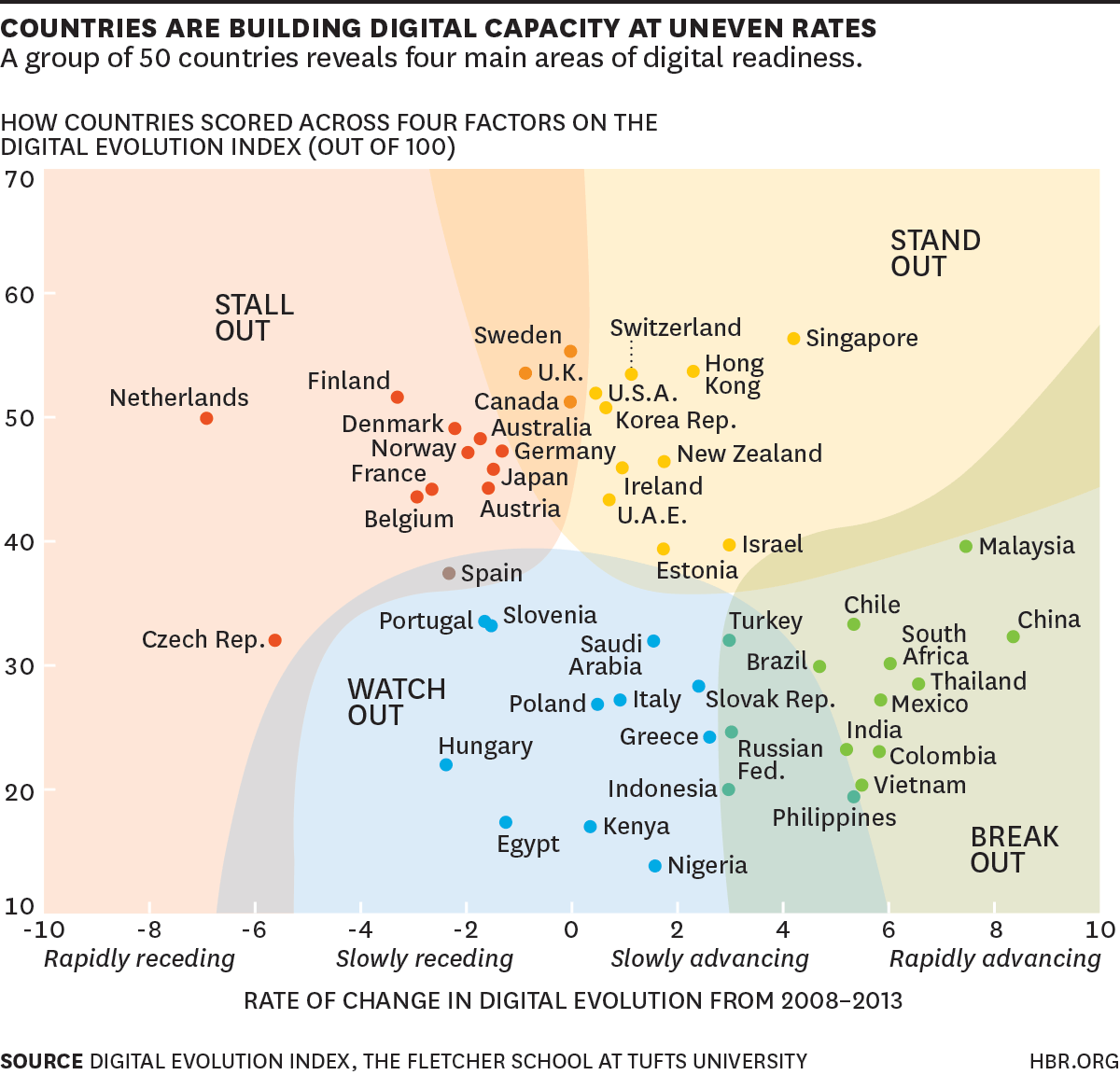 The transition to a global digital economy in 2014 was sporadic – brisk in some countries, choppy in others. By year’s end, the seven biggest emerging markets were larger than the G7, in purchasing power parity terms. Plus, consumers in the Asia-Pacific region were expected to spend more online last year than consumers in North America. The opportunities to serve the e-consumer were growing – if you knew where to look.
These changing rhythms in digital commerce are more than a China, or even an Asia, story. Far from Silicon Valley, Shanghai, or Singapore, a German company, Rocket Internet, has been busy launching e-commerce start-ups across a wide range of emerging and frontier markets. Their stated mission: To become the world’s largest internet platform outside the U.S. and China. Many such “Rocket” companies are poised to become the Alibabas and Amazons for the rest of the world: Jumia, which operates in nine countries across Africa; Namshi in the Middle East; Lazada and Zalora in ASEAN; Jabong in India; and Kaymu in 33 markets across Africa, Asia, Europe, and the Middle East.
Private equity and venture capital money have been concentrating in certain markets in ways that mimic the electronic gold rush in Silicon Valley. During the summer of 2014 alone $3 billion poured into India’s e-commerce sector, where, in addition to local innovators like Flipkart and Snapdeal, there are nearly 200 digital commerce startups flush with private investment and venture capital funds. This is happening in a country where online vendors largely operate on a cash-on-delivery (COD) basis. Credit cards or PayPal are rarely used; according to the Reserve Bank of India, 90% of all monetary transactions in India are in cash. Even Amazon localized its approach in India to offer COD as a service. India and other middle-income countries such as Indonesia and Colombia all have high cash dependence. But even where cash is still king, digital marketplaces are innovating at a remarkable pace. Nimble e-commerce players are simply working with and around the persistence of cash.
To understand more about these types of changes around the world, we developed an “index” to identify how a group of countries stack up against each other in terms of readiness for a digital economy. Our Digital Evolution Index (DEI), created by the Fletcher School at Tufts University (with support from Mastercard and DataCash), is derived from four broad drivers: supply-side factors (including access, fulfillment, and transactions infrastructure); demand-side factors (including consumer behaviors and trends, financial and Internet and social media savviness); innovations (including the entrepreneurial, technological and funding ecosystems, presence and extent of disruptive forces and the presence of a start-up culture and mindset); and institutions(including government effectiveness and its role in business, laws and regulations and promoting the digital ecosystem). The resulting index includes a ranking of 50 countries, which were chosen because they are either home to most of the current 3 billion internet users or they are where the next billion users are likely to come from.
As part of our research, we wanted to understand who was changing quickly to prepare for the digital marketplace and who wasn’t. Perhaps not surprisingly, developing countries in Asia and Latin America are leading in momentum, reflecting their overall economic gains. But our analysis revealed other interesting patterns. Take, for example, Singapore and The Netherlands. Both are among the top 10 countries in present levels of digital evolution. But when we consider the momentum – i.e., the five-year rate of change from 2008 to 2013 – the two countries are far apart. Singapore has been steadily advancing in developing a world-class digital infrastructure, through public-private partnerships, to further entrench its status as a regional communications hub. Through ongoing investment, it remains an attractive destination for start-ups and for private equity and venture capital. The Netherlands, meanwhile, has been rapidly losing steam. The Dutch government’s austerity measures beginning in late 2010 reduced investment into elements of the digital ecosystem. Its stagnant, and at times slipping, consumer demand led investors to seek greener pastures.
Based on the performance of countries on the index during the years 2008 to 2013, we assigned them to one of four trajectory zones: Stand Out, Stall Out, Break Out, and Watch Out.
Stand Out countries have shown high levels of digital development in the past and continue to remain on an upward trajectory.
Stall Out countries have achieved a high level of evolution in the past but are losing momentum and risk falling behind.
Break Out countries have the potential to develop strong digital economies. Though their overall score is still low, they are moving upward and are poised to become Stand Out countries in the future.
Watch Out countries face significant opportunities and challenges, with low scores on both current level and upward motion of their DEI. Some may be able to overcome limitations with clever innovations and stopgap measures, while others seem to be stuck.

Break Out countries such as India, China, Brazil, Vietnam, and the Philippines are improving their digital readiness quite rapidly. But the next phase of growth is harder to achieve. Staying on this trajectory means confronting challenges like improving supply infrastructure and nurturing sophisticated domestic consumers.
Watch Out countries like Indonesia, Russia, Nigeria, Egypt, and Kenya have important things in common like institutional uncertainty and a low commitment to reform. They possess one or two outstanding qualities — predominantly demographics — that make them attractive to businesses and investors, but they expend a lot of energy innovating around institutional and infrastructural constraints. Unclogging these bottlenecks would let these countries direct their innovation resources to more productive uses.
Most Western and Northern European countries, Australia, and Japan have been Stalling Out. The only way they can jump-start their recovery is to follow what Stand Out countries do best: redouble on innovation and continue to seek markets beyond domestic borders. Stall Out countries are also aging. Attracting talented, young immigrants can help revive innovation quickly.

What does the future hold? The next billion consumers to come online will be making their digital decisions on a mobile device – very different from the practices of the first billion that helped build many of the foundations of the current e-commerce industry. There will continue to be strong cross-border influences as the competitive field evolves: even if Europe slows, a European company, such as Rocket Internet, can grow by targeting the fast-growing markets in the emerging world; giants out of the emerging world, such as Alibaba, with their newfound resources and brand, will look for markets elsewhere; old stalwarts, such as Amazon and Google will seek growth in new markets and new product areas. Emerging economies will continue to evolve differently, as will their newly online consumers. Businesses will have to innovate by customizing their approaches to this multi-speed planet, and in working around institutional and infrastructural constraints, particularly in markets that are home to the next billion online consumers.
We may be on a journey toward a digital planet — but we’re all traveling at different speeds.