Greece Puts Its Fate to a Vote 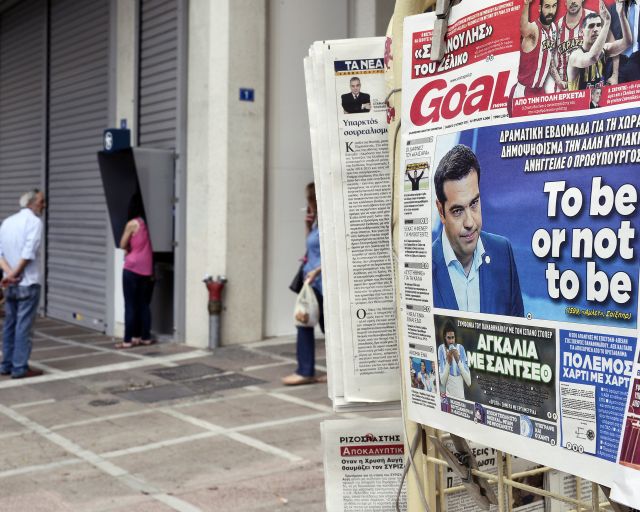 The Greek government will hold a referendum July 5 that could mark the beginning of the country's exit from the eurozone, although the government did not directly consult the public when it joined the currency area over a decade ago. This nationwide vote, announced by Prime Minister Alexis Tsipras June 27, would ask whether Athens should adopt the economic policies Greece's creditors have demanded in exchange for additional funds. The Greek parliament was to vote later today on whether to approve the planned referendum.
While the nationwide referendum would not directly address eurozone membership, a rejection of additional EU and International Monetary Fund money would put Greece close to a debt default. This would lead quickly to an exit from the eurozone. Even if the public accepts the bailout measures, Greece will likely not be able to avoid capital controls to protect its banking sector. During a meeting of eurozone finance ministers on June 27, Greece's creditors rejected a Greek request to extend the current bailout program expiring June 30.

The prime minister's decision to ask the Greek people about the country's future reflects the conflicting pressures mounting on Athens. In late January, Prime Minister Alexis Tsipras' left-wing Coalition of the Radical Left, known as Syriza, was elected on a platform that promised renegotiation of Greek debt, the end of austerity measures and the preservation of eurozone membership. It quickly became clear that these three promises were incompatible. Greece's creditors refused to renegotiate Athens' debt and demanded additional economic measures in exchange for financial help. At the same time, several Syriza members opposed reforms in sensitive areas such as pensions, privatization and labor regulations.
Ultimately, this internal contradiction proved impossible to resolve. Tsipras found that rejecting any of his campaign promises carried a high price. Signing a deal with creditors would risk rebellion within Syriza. Declaring a debt default would risk a virulent reaction from Greeks who want to remain in the eurozone. The July referendum will not truly resolve this dilemma, but at least puts the decision in the hands of voters.
Greece was supposed to pay 1.6 billion euros ($1.8 billion) to the International Monetary Fund on June 30. This is now not likely to happen. Missing this deadline will not automatically trigger disaster – the International Monetary Fund has roughly a month to decide whether to declare Athens officially in default. Greece's next debt maturity is with the European Central Bank on July 20, which means Athens still has time before its European lenders consider it in default. This suggests that, regardless of the outcome of the referendum, Tsipras will go back to the negotiating table after the vote. His approach during the new talks will be shaped by the decision of Greek voters.
Even if the Greek government plans to continue negotiating with its creditors, the referendum creates significant uncertainty in Greece and capital controls will be difficult to avoid. Already on June 27, Greeks were lined up outside Greek banks to withdraw money from ATMs. This will add to billions of euros in capital flight since the beginning of the year.

In the coming days, several actors will be key to Greece's future. The Greek people themselves are chief among these. Polls, however, reveal contradictory public opinion. Most Greeks want to remain in the eurozone, but also reject painful austerity measures. This could lead to a close vote, especially because the government has suggested that it will campaign against the agreement with the creditors. Should people vote in support of the agreement, the Greek government could collapse. Should people vote against the agreement, a Greek exit from the eurozone would be harder to avoid.
The decisions of eurozone governments and EU institutions will also be crucial for Greece's future. The European Central Bank has been essential in keeping Greek banks afloat by providing them with emergency liquidity. This assistance, however, was based on the expectation of an agreement between Athens and its lenders. Should the European Central Bank stop providing liquidity to Greek banks, Athens would probably be forced to introduce capital controls and, at a later stage, potentially convert all loans into a new national currency.
The European Central Bank could also play a key role in stabilizing the entire euro system. Over the past three years, Europe's financial crisis was somewhat mitigated by the European Central Bank's promise to intervene to rescue countries in distress. So far, the fear of contagion to other debt-ridden eurozone countries such as Portugal and Spain has been modest. A Greek exit could be a concrete test of the European Central Bank's promise to do "whatever it takes" to protect the eurozone. There will also have to be a political reaction because countries from Germany to Italy will have to make political gestures of unity, showing that Greece is an exceptional case and that the eurozone remains strong and united.

Even if the referendum is not explicitly about the eurozone, a "no" vote would put Greece closer to leaving the currency union. With a clear mandate against austerity, Tsipras would go back to Brussels making demands that could be too difficult for the creditors to accept. Many of Greece's lenders are dealing with domestic pressure not to make concessions to Athens. This is particularly true in Germany's case, as Chancellor Angela Merkel is under pressure from conservative sectors of her government not to concede softer fiscal targets for Greece, let alone debt relief.
A Greek exit from the eurozone could happen in a number of ways. One would be the introduction of a parallel Greek currency to coexist with the euro. Another might be a temporary suspension of Greece's membership. Independently of how a potential exit unfolds, the process would be extremely complex, because current EU legislation does not foresee countries leaving the currency area. Existing norms allow for countries to leave the European Union, but the treaties are ambiguous about the eurozone. Joining the currency union was supposed to be irreversible. Should Greece leave the euro, it would take a political decision by the rest of the members to keep Athens in the European Union.
A "yes" vote in the referendum would also yield complex consequences, especially if the Greek government itself campaigns on a "no" vote. A vote in favor of austerity would only exacerbate tensions within Syriza and several party members could leave. Tsipras would be under significant pressure to resign and call for early elections. Even if he managed to stay in power, he may need to form a new government, this time with moderate forces. A "yes" vote would also mean that he would not be able to make new demands to the creditors.
The Greek government's decision to hold a referendum was meant to give Athens a popular mandate on what to do next. The question, however, is not about eurozone membership but about austerity, meaning that its outcome will not make the Greek crisis any simpler. Tsipras will go back to the negotiating table after July 5, but his negotiating strategy will be shaped by the result of the vote. Far from reducing uncertainty, the referendum will only make the situation more volatile.
Publicado por Marcelo Montes en sábado, junio 27, 2015