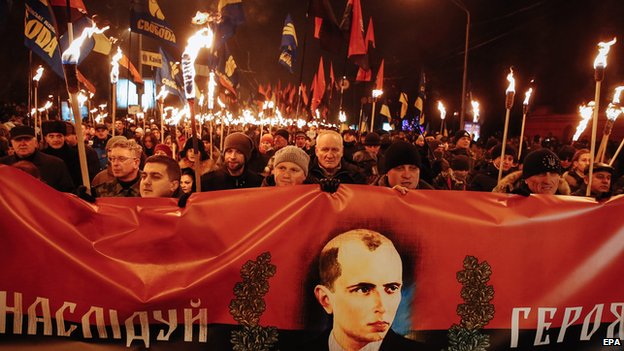 A hero to some Ukrainians, Bandera is a hate figure for many Russians
At the rally far-right leader Oleh Tyahnybok, who heads the Svoboda party, urged the authorities to return "Hero of Ukraine" status to Bandera.
Many Russians revile Bandera, born on 1 January 1909. President Vladimir Putin has called him "Hitler's accomplice".
Russia says it supports separatists in eastern Ukraine because of a neo-Nazi threat to ethnic Russians.
WWII echoes

Marchers carried the nationalist flags of Svoboda and the Right Sector - both movements which helped to topple ex-President Viktor Yanukovych last February, who was an ally of Moscow.
Some marchers also wore World War Two nationalist uniforms. Turnout at the rally was estimated at 2,500.
Russia says some Russian TV journalists were assaulted at the Kiev march.
Two women reporters with the pro-Kremlin TV channel LifeNews were "attacked" by masked assailants, who smashed their camera and stole a mobile phone, the Russian foreign ministry said.
"This is the latest glaring instance of the media being persecuted in Ukraine for doing their job," ministry spokeswoman Maria Zakharova said.
A man has been arrested in connection with the incident, Ukraine's Unian news agency reports.
Bandera is a controversial figure in Ukraine. His "hero" status was revoked by Mr Yanukovych.
Despite leading anti-Soviet resistance fighters, Bandera was arrested and jailed by the Nazis during the war. He was assassinated by a Soviet KGB agent in Munich in 1959.
Publicado por Marcelo Montes en viernes, enero 02, 2015