What the world values, in one chart

VOX
Updated by Brandon Ambrosino on December 29, 2014, 1:00 p.m. ET @BrandonAmbro brandon@vox.com
The more globalized our world becomes, the more we learn about similarities and differences that cut across all cultures.
These things are sometimes easy to trace on a small scale. For instance, it's easy to chart the religious differences between, say, Indonesia and China. In 2000, 98 percent of Indonesians said religion was important to them compared to just 3 percent of Chinese citizens who said the same thing, according to WVS. But not every cultural comparison is that easy to make.
Two professors, however, are finding ways to compare how our values differ on a global scale.
Using data from the World Values Survey (WVS), professors Ronald Inglehart of the University of Michigan and Christian Welzel of Germany's Luephana University comprised this amazing Cultural Map of the World. 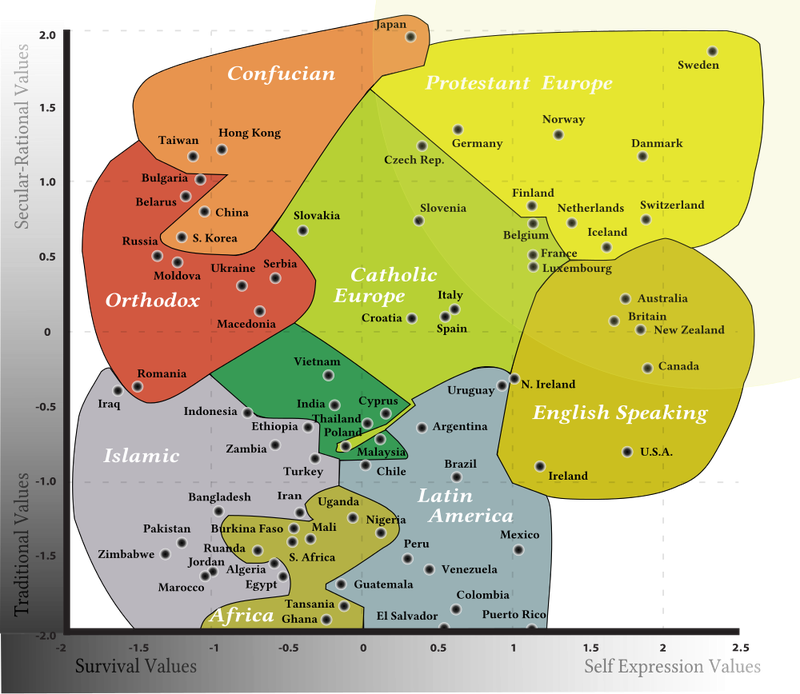 The Ingelhart-Welzel Cultural Map of the World. (NB: the green cluster in the center of the map is unmarked, but is labeled South Asian.)
What you're seeing is a scatter plot charting how values compare across nine different clusters (English-speaking, Catholic Europe, Islamic, etc.). The y-axis tracks traditional values, versus secular-rational values.
What do those terms mean? According to WVS, traditional values (the bottom of the y-axis) emphasize religion, traditional family values, parent-child ties, and nationalism. Those with these values tend to reject abortion, euthanasia, and divorce. On the other hand, those with secular rational values (the top of the y-axis) place less preference on religion and traditional authority, and are more accepting of abortion and divorce.
The x-axis tracks survival values versus self-expression values. Survival values emphasize economic and physical security and are linked with ethnocentrism and low levels of tolerance. Self-expression values, according to WVS, "give high priority to environmental protection, growing tolerance of foreigners, gays and lesbians and gender equality, and rising demands for participation in decision-making in economic and political life."
WVS offers this admittedly simplified analysis of the plot:

... following an increase in standards of living, and a transit from development country via industrialization to post-industrial knowledge society, a country tends to move diagonally in the direction from lower-left corner (poor) to upper-right corner (rich), indicating a transit in both dimensions.
However, the attitudes among the population are also highly correlated with the philosophical, political and religious ideas that have been dominating in the country. Secular-rational values and materialism were formulated by philosophers and the left-wing politics side in the French revolution, and can consequenlty be observed especially in countries with a long history of social democratic or socialistic policy, and in countries where a large portion of the population have studied philisophy and science at universities. Survival values are characteristic for eastern-world countries and self-expression values for western-world countries. In a liberal post-industrial economy, an increasing share of the population has grown up taking survival and freedom of thought for granted, resulting in that self-expression is highly valued.

The map, known as the Inglehart-Welzel map, was published in 2010, and was based on data published by the WVS between 1995 and 2009. The WVS "is the largest non-commercial, cross-national, time series investigation of human beliefs and values ever executed," according to its website. It's been around since 1981 and has surveyed over 400,000 respondents in more than 100 countries.
Publicado por Marcelo Montes en lunes, diciembre 29, 2014