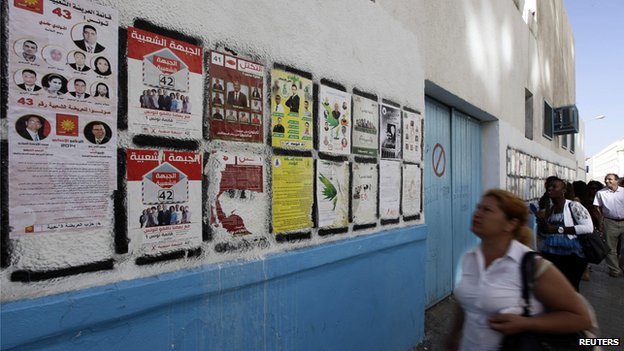 Tunisia is set to elect its first full parliament under a new constitution passed earlier this year.
The election is one of the final stages in the political transition which followed the ousting of authoritarian leader Zine al-Abidine Ben Ali in 2011.
There are no opinion polls, but the moderate Islamist Ennahda party, which won Tunisia's last national election in 2011, is expected to do well.
Its main rival is likely to be the liberal Nidaa Tounes (Tunisia's Call).
Most of the major parties have vowed to tackle Tunisia's high unemployment and to reinvigorate its economy.
Tunisia is seen as the birthplace of the "Arab Spring" - the pro-democracy movement which sought to replace autocratic governments in several Arab countries.
Tunisia is considered to have had the most successful outcome, with relatively low levels of violence.
However, radical groups within Tunisia have threatened to disrupt the elections and on Thursday militants shot a policeman on the outskirts of the capital, Tunis.
Unity deal promised

More than 50,000 security personnel and nearly 20,000 soldiers are expected to be deployed on Sunday to ensure safe voting.
Around five million Tunisians have registered to vote, with overseas residents having already cast their votes on Friday. 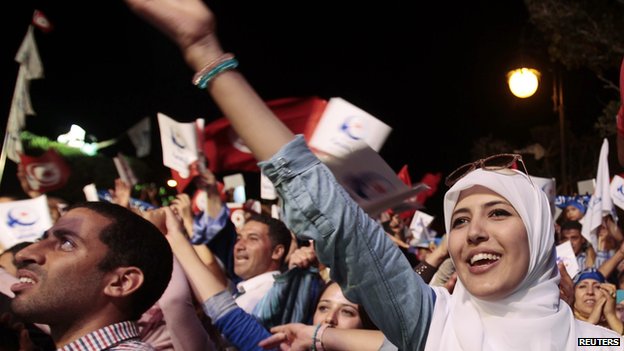 The Ennahda party and others have held large rallies ahead of Sunday's vote
Some observers fear a low turnout, arguing that voters have become disaffected with politics after a lack of economic progress in the years following Ben Ali's overthrow.
Results are expected on Wednesday. Ennahda, which currently rules in coalition with other parties, has promised to pursue a unity government even if it wins the most seats.
Tunisia is set to hold a presidential election on 23 November, which will deliver the country's first directly elected leader following the ousting of Ben Ali in street protests almost four years ago.
The protests, which began in the Tunisian town of Sidi Bouzid in late 2010, later gathered pace and spread across much of the Arab world the following year.
Publicado por Marcelo Montes en domingo, octubre 26, 2014