A NEW HUMANITARIAN CRISIS IN THE MEDITERRANEAN SEA 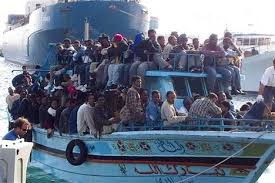 An estimated 300 people are feared dead after attempting to reach Italy from Libya in three inflatable rafts, the UN refugee agency said after speaking to survivors rescued by Italy's coastguard in the past few days.
An Italian tug boat rescued nine people who had been on two different boats on Monday and brought them to the Italian island of Lampedusa on Wednesday morning.
They are the only known survivors from their two boats, leaving more than 200 unaccounted for, they told the United Nations High Commissioner for Refugees (UNHCR) officials.
Three boats, each carrying about 100 people, are missing, according to interviews with survivors from two of the boats, Barbara Molinario, a UNHCR official, told the Reuters news agency.
The three boats had left Libya together with an additional one from which the coastguard picked up 105 people on Sunday in extreme sea conditions and with the temperature hovering just a few degrees above zero, witnesses said.
Twenty-nine from that boat reportedly died of hypothermia in the 18 hours it took the coastguard to ferry them to Italy.
The nationalities of the survivors and those missing were not immediately given, but a large proportion of those arriving at the moment are fleeing conflicts in Iraq, Syria and Mali.
Several thousand people have died trying to make the perilous crossing from North Africa to Europe across the Mediterranean in the last year alone.
EU patrol boats criticised
UNHCR, Save the Children, Amnesty International and other aid groups blasted the new EU-backed rescue patrol as insufficient for the task at hand.
The European Union took over Mediterranean patrols after Italy phased out its robust Mare Nostrum operation in November. Mare Nostrum (Our Seas) had been launched in 2013 after 360 migrants drowned off the coast of the Sicilian island of Lampedusa.
But the EU's Triton mission only operates about 50km off Europe's coast whereas Mare Nostrum patrols took Italian rescue ships up close to Libya's coast.
"The Triton operation doesn't have as its principal mandate saving human lives, and thus cannot be the response that is urgently needed," Laurens Jolles, the head of the UN agency for southern Europe, said in a statement.
Save The Children called for the EU to urgently meet to restart Mare Nostrum "or another rescue system that has the mandate, the capacity and means to prevent other tragedies".
Italian Prime Minister Matteo Renzi said he would ask the European Council to respond with "more determination," but he said the key issue was instability in Libya, the smugglers' point of departure, not the two operations.
"If only the discussion were just about Mare Nostrum or Triton," Renzi told Sky TG24. "The key political question is that for months, for years, Libya has been completely out of control."
"Pointing fingers is not going to get us anywhere," spokeswoman for the European Commission, Natasha Bertaud, said in Brussels. "If we want to talk seriously about improving the situation then we also need to talk about financing it adequately."
The commission is currently conducting a feasibility study into whether a border guard system would be worthwhile, with the first discussions expected to begin next month
Publicado por Marcelo Montes en miércoles, febrero 11, 2015