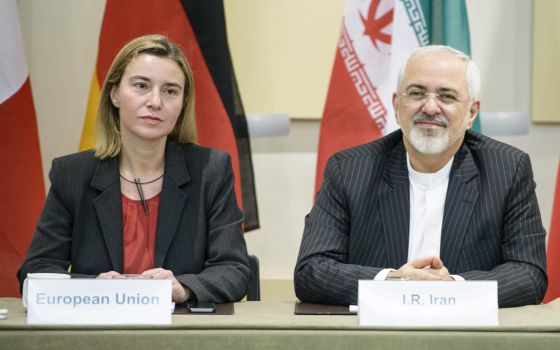 OTHER LINKS RELATED, OF YOUR INTEREST
After eight straight days of high-level diplomatic negotiations between the six world powers and Iran, negotiators in Lausanne, Switzerland, announced an interim agreement has been reached on the principles for dismantling Iran's nuclear program in exchange for lifting heavy economic sanctions.
"Today we have taken a decisive step," said Federica Mogherini, the High Representative of the European Union, responsible for coordinating the talks. "We have reached solutions on key parameters of a joint comprehensive plan of action."
At the White House, President Obama called it “an historic understanding with Iran, which, if fully implemented” will prevent the country from obtaining a nuclear weapon.
“This has been a long time coming,” Obama said.
Mogherini outlined some specifics about the interim deal in a the news conference, standing alongside Iran's foreign minister.
Among the agreements:
Iran's deep-buried nuclear facility at Fordo will be converted from a a nuclear site into a physics and technology center. No fissile material will remain there.
The heavy water reactor at Arak will not be redesigned and will not produce weapons-grade plutonium.
In return, nuclear-related economic sanctions against Iran will be lifted immediately.
"If Iran cheats, the world will know it. If we see something suspicious, we will inspect it," President Obama said. "With this deal, Iran will face more inspections than any other country in the world."
Moments before the press conference, Iranian leaders, including President Hassan Rouhani and Foreign Minister Mohammad Javad Zarif, released short statements via Twitter today that "solutions on key parameters" have been "reached" and that negotiators are ready to begin drafting an agreement.
Publicado por Marcelo Montes en jueves, abril 02, 2015