Boost for Better Together campaign as poll finds no vote is now at 53%, days after surveys suggested race was neck and neck 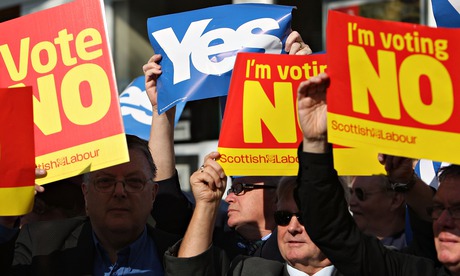 Scottish independence: yes and no supporters during a walkabout in Glasgow by John Prescott and Alistair Darling. Photograph: Jeremy Sutton-Hibbert/Getty Images


A new opinion poll on Scottish independence has found the no vote back in the lead at 53% of voters, suggesting the sudden surge in backing for independence has subsided.
Only days after a spate of polls suggested the referendum race was neck and neck, the Survation poll for the Daily Record has found that the no vote is now at 53%, giving the pro-UK campaign a six point gap over yes.
That is the same margin given by Survation two months ago. Including the 10% of voters still to decide, the survey of 1,000 voters found that 47.6% plan to vote no on 18 September, with 42.4% voting yes.
Earlier this week, a YouGov poll for the Times found that the yes vote was in the lead for the first time by two points but Survation's findings – leaked on Wednesday several hours before they were due to be published – suggest that Scottish public opinion is far more unpredictable.
Sterling rallied to its highest point of the day against the US dollar after the Survation poll was released.
The pound hit $1.6189, up 0.4% on Tuesday night's close, after another day of jittery trading in the City of London.
Earlier in the day sterling had slumped to a new 10-month low of $1.6051, amid speculation that Survation might show the yes campaign closing the gap.
Survation is widely seen as being more favourable to the yes vote, so its latest findings will give comfort to the no campaign after David Cameron, Ed Miliband and Nick Clegg abandoned their normal routines at Westminster to head north to campaign for a no vote.
The Survation poll was carried out from 5 to 9 September, the five day period after the YouGov polling for the Sunday Times that gave yes its first shock lead.
Significantly for Ed Miliband and the Labour party, after YouGov found that a third of their supporters would back independence, Survation finds that only a quarter of Labour voters, at 26%, were planning to vote yes next week.
By comparison, 18.5% of SNP voters were expecting to vote no to independence. Survation's sample suggests that the yes campaign will win comfortably in the west of Scotland, centred on Glasgow, and in central Scotland, but are behind in every other region.
Publicado por Marcelo Montes en miércoles, septiembre 10, 2014