EU hopeful of gas deal between Ukraine and Russia 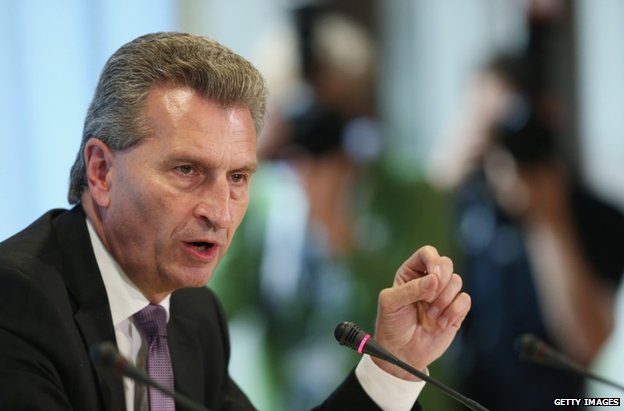 Guenther Oettinger gave a news conference after the talks
The EU's energy commissioner is hopeful of a deal between Ukraine and Russia to end their dispute over gas deliveries after three-way talks in Berlin.
Guenther Oettinger outlined a plan which would see Russia supply Ukraine over the winter and into the spring.
Ukraine would pay Russia $2bn (£1.2bn) of its gas debt by the end of October and another $1.1bn by the year's end.
The talks will continue next week. Russia halted supplies in June over Ukraine's unpaid debts.
Relations had soured after the overthrow of Ukraine's pro-Russian President, Viktor Yanukovych, in February and Russia's subsequent support for separatists in Crimea and other Ukrainian regions.
'Price at issue'

Friday's talks came after Hungary cut its gas deliveries to Ukraine, arguing that it needed to stock up its reserves.
Hungary was criticised by the European Commission but argued that it could not risk being cut off by Russia before winter set in.

Mr Oettinger said the amount of gas delivered from Gazprom to Ukraine's Naftogaz state gas firm was "undisputed" but the price was still "at issue".
Under the EU plan, in return for the debt repayment, Gazprom would supply at least 5bn cubic metres of gas to Ukraine at $385 per 1,000 cubic metre, to be paid in advance.
"Now the price is being debated in court and no party will have an interest in damaging its legal position in front of the court," the EU energy commissioner said. 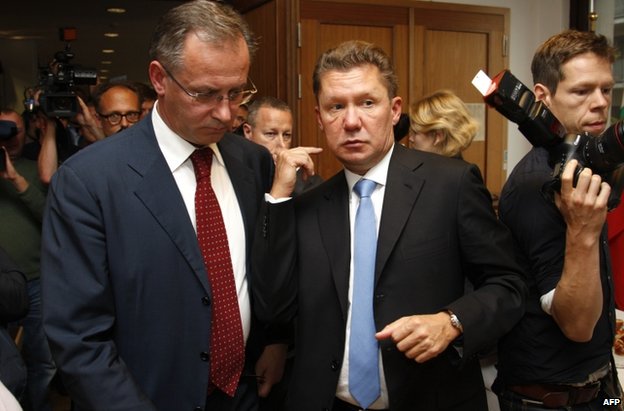 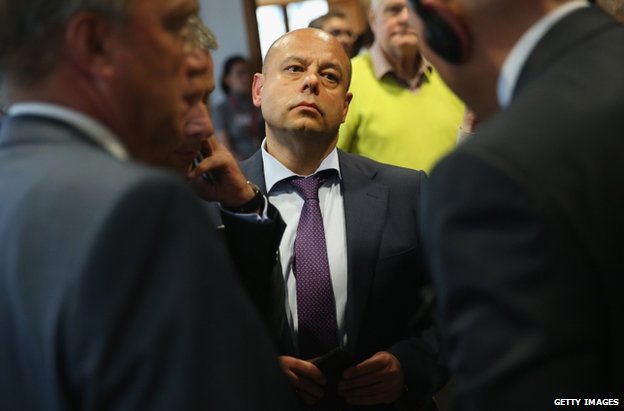 Ukrainian Energy Minister Yuri Prodan was at the talks
The parties at the talks on Friday still needed to consult with their governments, he added.
He said he expected the issue to be clarified early next week, after which he, ministers and CEOs would meet at the end of the week, again in the German capital.
Russia cut off all gas supplies to Ukraine after Kiev failed to settle its debt with Gazprom. Gazprom had sought $1.95bn out of a total claim of $4.5bn.
The Russian company said Ukraine had to pay upfront for its future supplies.
Hungarian cut

Russia says EU states are contractually forbidden from re-exporting gas to Ukraine but Brussels insists that such "reverse flows" are legal.
When Ukraine stopped receiving direct gas supplies from Russia in June, Russian exports to the rest of Europe were not affected, BBC World Service business correspondent Theo Leggett writes.
As a result Kiev has been able to obtain some supplies indirectly from Hungary, Poland and Slovakia, through pipelines normally used to send gas the other way.
Hungary's Prime Minister, Viktor Orban, said on Friday: "Hungary cannot get into a situation in which, due to the Russian-Ukrainian conflict, it cannot access its required supply of energy,"
He added that Gazprom had agreed to supply his country with extra gas in order to fill its storage facilities ahead of the winter.
Mr Orban has been critical of EU sanctions on Russia and has maintained a closer relationship with Moscow than his western European neighbours.
Publicado por Marcelo Montes en sábado, septiembre 27, 2014