THE DRAMATIC SITUATION IN EAST JERUSALEM

Spending a few days in East Jerusalem left me terrified. Here’s why. 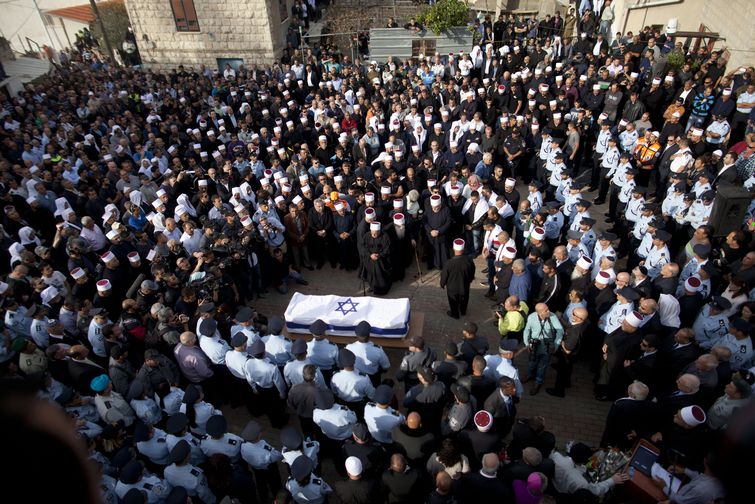 TEL AVIV — Tuesday night, East Jerusalem was almost disturbingly quiet. After two of the city's Arab residents murdered five Israelis in a synagogue, Israeli police were out in force. But as I wandered around in the heavily Arab parts of town, there was almost no sign of struggle.
The quiet was false. Israeli police have set up new checkpoints outside of Arab neighborhoods. On Thursday morning, soldiers went into the Shuafat refugee camp in East Jerusalem. They were informing relatives of Ibrahim al-Akkari, who killed one Israeli and wounded five by ramming into them with his car on November 5, that their home would be destroyed. According to Ma'an News Agency, clashes broke out in the camp between Palestinian residents and the soldiers. The same day, Israeli police intercepted a cache of "fireworks, knives, and tasers" allegedly destined for East Jerusalem rioters.
This tension isn't just a response to the synagogue killing — the worst single attack on Israeli civilians in three years. It's about the broader, months-long unrest in East Jerusalem from which the attack sprung. The day before the synagogue attack, I saw Israeli police shut down a road. One observer told me that a thrown stone had smashed through a cab's windshield, apparently into the cabbie. This was just blocks from my hotel.
The Jerusalem violence is being propelled by forces beyond either the Israeli or Palestinian leadership's control. The longer it goes on, the greater the risk of governments being pulled in — posing a threat to the fragile lull in national violence after the summer's war in Gaza. 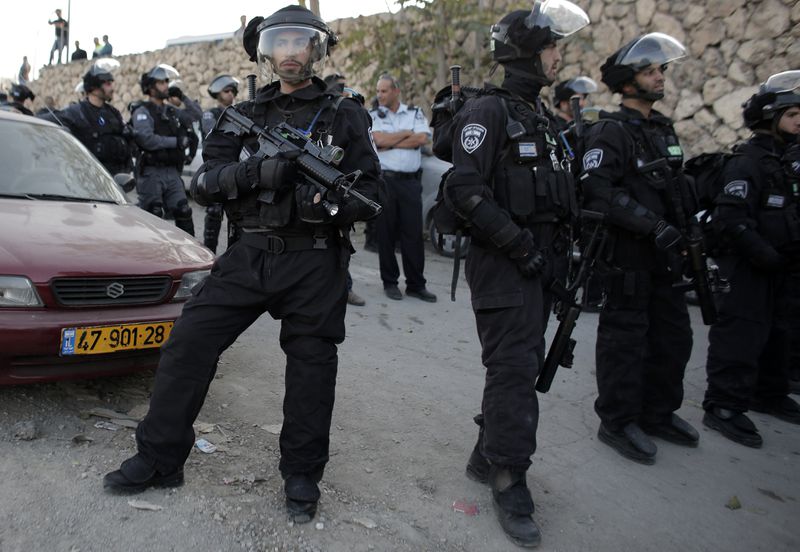 Israeli security forces stand guard during a protest in Issawiya. (Ahmad Gharabli/AFP/Getty Images)
Walking around the city, it's not obvious what divides East Jerusalem — the part of the city Israel conquered in 1967 — from its western sibling. But East Jerusalem, home to about 98 percent of the city's Muslim residents, really is different. Its Arab residents are significantly poorer than the Jewish ones. In fact, they aren't even Israeli citizens. Unlike Arab residents of Israel proper, East Jerusalem residents aren't considered Israeli: any peace deal would require handing over a large percentage of East Jerusalem to the Palestinian Authority.
But East Jerusalem's Arabs aren't exactly Palestinian, either. Israel annexed East Jerusalem after conquering it in 1967, so the Israeli government, not the Palestinian Authority, runs the area.
That means, in practice, that East Jerusalemites don't have meaningful political leadership. They're allowed to vote for local Jerusalem offices (though not in Israeli national elections), but they refuse — they see themselves as under Israeli occupation, and thus see voting as collaboration. In the 2008 local election, just 1.8 percent of eligible East Jerusalem Arabs voted.
The bottom line, then, is that you've got an impoverished, disenfranchised population that's just blocks away from Israeli communities in both West and East Jerusalem. The PA has no authority over them, and they don't respect the Israeli authorities. This is a situation rife for provocation — and lots of people are happy to give them one.

Forces beyond the leadership's control conspire to make Jerusalem violent 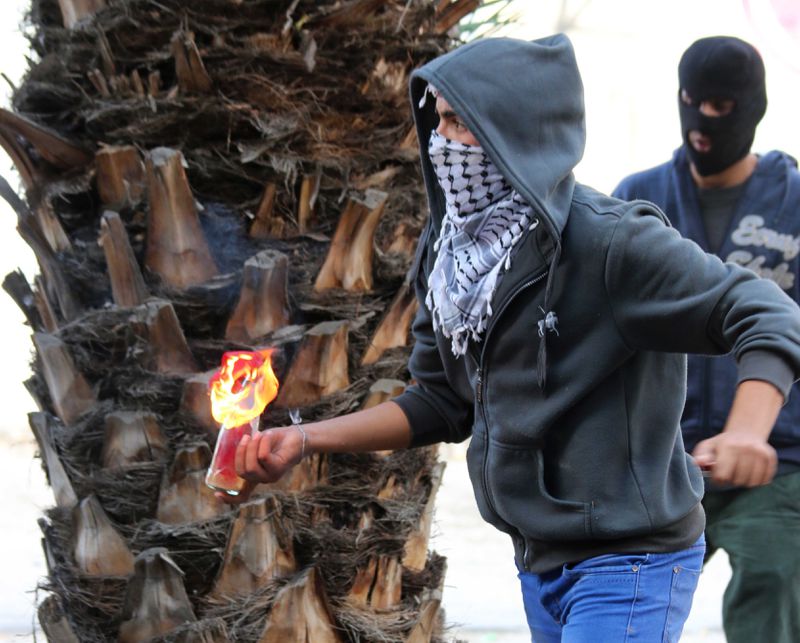 A Palestinian holds a Molotov cocktail in Abu Dis. (Anna Ferensowicz/Pacific Press/LightRocket/Getty Images)
The political vacuum in East Jerusalem is easy for extremist factions on both sides to exploit. The popular anger among East Jerusalem Arabs makes it easy to inflame tensions, and hard for governments to lower them.
That's how the current spate of riots and violence really got started. The anti-Israeli violence escalated considerably after the July murder of Muhammed Abu Khdeir — a Palestinian teen killed by Jewish extremists in retaliation for the killing of three young Jews. Khdeir's killing, which took place in East Jerusalem, inflamed latent anti-Israeli sentiment. There was already some violence in Jerusalem's Arab neighborhoods, but it escalated seriously after that.
The existence of this underlying anger makes provocation extremely dangerous. Take the Temple Mount, the holy site for Jews and Christians. Right-wing Israeli activists, includingKnesset members in the governing coalition, having been waging a campaign to assert Jewish rights to pray anywhere on the Temple Mount. Right now, Jews are are allowed to visit the summit, but not pray openly there. This is a compromise of sorts — Jews are free to pray in front of the Western Wall, widely considered to be the holiest Jewish site that's accessible for prayer — but not at the top of the Mount itself.
The situation is volatile. Arabs perceive the push to change the Temple Mount status quo as a means of asserting Jewish control over a shared holy site (it's currently managed by the Islamic Waqf). So the campaign to expand prayer had infuriated East Jerusalem's Palestinians: one prominent Jewish Temple Mount activist was nearly assassinated. More inflammatory actions from activists could result in even more East Jerusalem violence.
But Palestinian rioters and terrorists don't always need to be provoked. The perpetual low-level violence since July, which has gotten more lethal in the past few weeks, are a testament to that.
According to the head of the Shin Bet, Israel's equivalent of the FBI, these incidents are almost all conducted by lone wolves. Because the violence is uncoordinated, it's hard to detect. And the more violence there is, the more likely Israeli authorities are crackdown.
The point, then, is that Israeli and Palestinian extremists alike can bypass their official leadership if they want to make the situation worse. Netanyahu has a lot of trouble reining in the hard-right Knesset members in his coalition — let alone private Temple Mount activists. And Palestinian President Mahmoud Abbas has no real power over random young men in East Jerusalem. The two groups can aggravate each other directly, conspiring to deepen the crisis.

The situation is incredibly precarious 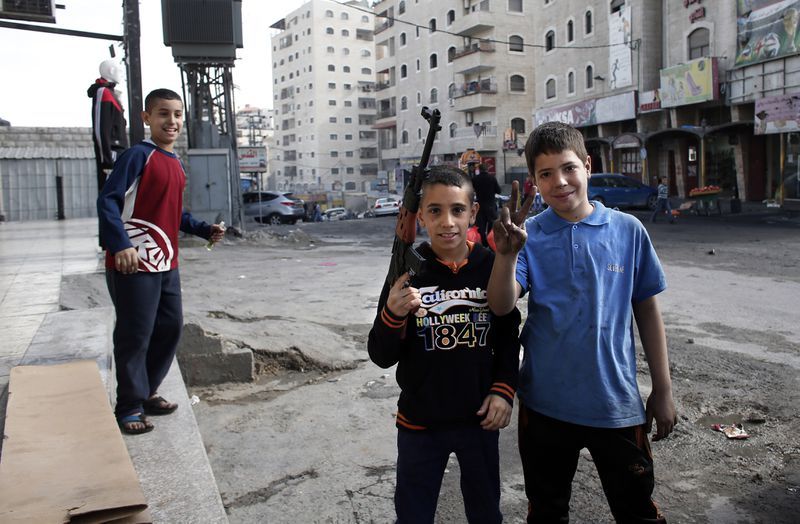 Palestinian boys with a toy gun in Shuafat. (Thomas Coex/AFP/Getty Images)
The fact that governments can't really stop provocations or violence from happening doesn't mean that they don't play an important role here. Palestinian and Israeli authorities can calm the situation — or escalate it.
Abbas, for his part, did the right thing condemning the synagogue attack. That said, a constant drumbeat of angry rhetoric from his office hasn't calmed the situation. When Abbas warned about Jews "contaminating" the Temple Mount, and vowed to defend it from incursions, it sounded an awful lot like a justification for violence. Though the Shin Bet chief believes Abbas isn't intentionally trying to escalate the violence, he also believe the Palestinian leader's words are part of the problem: "some part of the Palestinian public views [Abbas'] statements as legitimizing terror."
Netanyahu also needs to keep a careful lid on the Israeli policy response. On Thursday, virtually the entire Israeli security establishment — Defense Minister Moshe "Boogie" Ya'alon, the top military brass, and leading police officials — told him that keeping the military there would make things worse, not better. "Both the IDF and police fear that soldiers would be too quick to fire at demonstrators or exaggerate when using riot control measures," Ha'aretz's Amos Harel reports. Netanyahu needs to avoid making a bad situation even worse.
But the leaders aren't even fully in control of their own actions. There's a lot of Palestinian support for "resistance" against Israel. Israelis just want their government to do something to stop the violence. Naftali Bennett, leader of the Jewish Home party and Netanyahu's chief rival for the leadership of the Israeli right, has called for an extended military operation in East Jerusalem aimed at stopping the attacks.
So Palestinian politics inclines Abbas to back the violence, while Israeli politics points Netanyahu towards a harsh response. The longer violence goes, on, the greater the danger of some kind of escalation becomes.
And in this case, escalation would mean a full-blown intifada, a national Palestinian uprising against Israel. The last one ended in 2005, but not before it claimed thousands of lives. The unrest is contained to Jerusalem right now, but there's no guarantee that West Bank Palestinians stay quiet forever. This isn't yet the third intifada, and it's far from inevitable that it becomes one. But even a risk of one makes the growing instability in Jerusalem really, really scary.
Publicado por Marcelo Montes en jueves, noviembre 20, 2014