In the past the Lords has acted as a valuable safety net for the Commons’ shortcomings – recently on veering from modern slavery, lobbying, pensions, trade union reform and privatisation of Royal Mail. They may not be to everyone’s taste, but we would have seriously missed them if they weren’t there
, THE INDEPENDENT, NOVEMBER, FRIDAY, 4TH 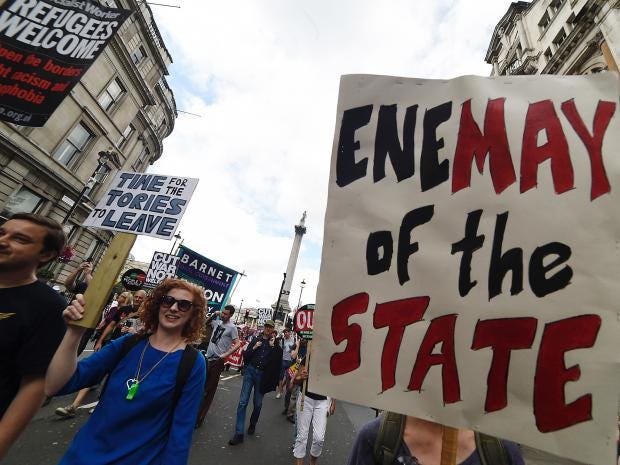 Baroness Smith, Labour’s leader in the Lords, has declared that the upper house will not block Brexit following yesterday’s High Court ruling.  But her group has nowhere near a majority of votes in the Lords, so the prospect of “white knights” in ermine riding to the rescue of the Remain camp – and blocking Brexit once and for all – is real.
This is truly a constitutional minefield, but the challenge of finding a safe way across is hugely increased by a deafening cacophony of conflicting views, each issue over-layering the other.
So, we have the judicial system pilloried – yet no serious doubt that the limit of Prime Ministerial prerogative was one that  needed to be legally  tested. We have suggestions that unelected peers (riding on the coat-tails of those pesky unelected judges) will deny the “will of the people” as expressed in the EU referendum, despite the obvious and sumptuous irony.  And we have the regurgitated threat to abolish the House of Lords when it does something the Commons doesn’t like.
The politics of all this reek. Do we not expect judges to look at facts, evidence and law and rule accordingly? Has no-one read the judgmentwhich is clearer than crystal? Are we really advocating only accepting those democratic decisions that go our way? Do we embrace opportunism as the basis for Parliamentary reform?
If, as the good Baroness also said, “we will scrutinise, we will examine.... we need to be adult about this, “  there is a genuine lack of clarity  about the Brexit strategy and now a clear  responsibility on Parliament to  scrutinise.  And even if everyone does act and speak in good faith, the Prime Minister’s assertion that her timetable for activating Article 50 is unchanged seems untenable.  Debate and oversight inevitably take time, and the prospect of significant delay is very real.
There is an even greater irony in the attacks now falling thick and fast on the Peers when you look at where they are coming from. That so many conservative or right-wing commentators – the  traditional allies, supporters and defenders of the Lords – have taken up pens against them shows (again) the toxicity of the Brexit debate.
But is this a defining moment for the noble members? What the Lords do best is scrutiny of the most detailed kind. The views of the 182 cross-bench (or independent) peers are hugely influential, impervious to party bullying or blandishments, and rightly and keenly sought. Notions of fairness, morality and justice seem to weigh more heavily on the red benches than the green.


On one level there is no mystery to how the Lords may delay a move to activate Article 50. It is simply by raising questions and moving amendments at every stage of the parliamentary process they can. There is a separate and detailed debate about the precise nature of that process, including timescales. But since 1911, the Lords have only a limited period of time for which they can delay legislation coming from the Commons, not a veto.
So the Lords could not block Article 50 on their own – but depending on the format of the legislation, the length of time the government will take to formulate a plan, and  the likely delays in the Commons before it reaches the Lords, the Peers’ action could be decisive, especially if it means a final decision is delayed until after a General Election.
The mutterings about the Lords being abolished if they defy the will of Parliament is therefore disingenuous hyperbole. Proper scrutiny is important as well as, now, a legal requirement. In the past the Lords has acted as a valuable safety net for the Commons’ shortcomings – recently on veering from modern slavery, lobbying, pensions, trade union reform and privatisation of Royal Mail. They may not be to everyone’s taste, but we would have seriously missed them if they weren’t there.
But once we get to within  touching  distance of the next General Election, you can bet that the pace will slow and, lo and behold, we go to the polls in 2020 in what is effectively a rerun of the EU referendum (which is what an election earlier would be too). What a mess.
But there is a long way to go in this process. And right now we seem to be committed only to stoking the pyre of common sense with a likely government appeal to the Supreme Court, whose sessions are usually live-streamed. More delay, more confusion, more shouting.
The EU referendum (which, remember, started all this) showed how fractured our country has become, with a breakdown in the relationshipbetween the people and the political, media, and business elite. The residents of this growing Tower of Babel forget that at their peril.
Publicado por Marcelo Montes en viernes, noviembre 04, 2016